Extension of operating range in pump-turbines. Influence of head and load 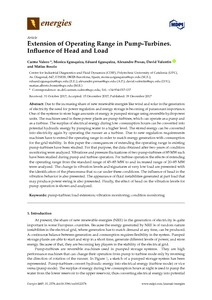 Except where otherwise noted, content on this work is licensed under a Creative Commons license : Attribution-NonCommercial-NoDerivs 3.0 Spain
Abstract
Due to the increasing share of new renewable energies like wind and solar in the generation of electricity the need for power regulation and energy storage is becoming of paramount importance. One of the systems to store huge amounts of energy is pumped storage using reversible hydropower units. The machines used in these power plants are pump-turbines, which can operate as a pump and as a turbine. The surplus of electrical energy during low consumption hours can be converted into potential hydraulic energy by pumping water to a higher level. The stored energy can be converted into electricity again by operating the runner as a turbine. Due to new regulation requirements machines have to extend the operating range in order to match energy generation with consumption for the grid stability. In this paper the consequences of extending the operating range in existing pump-turbines have been studied. For that purpose, the data obtained after two years of condition monitoring were analyzed. Vibrations and pressure fluctuations of two pump-turbines of 85 MW each have been studied during pump and turbine operation. For turbine operation the effects of extending the operating range from the standard range of 45–85 MW to and increased range of 20–85 MW were analyzed. The change in vibration levels and signatures at very low load are presented with the identification of the phenomena that occur under these conditions. The influence of head in the vibration behavior is also presented. The appearance of fluid instabilities generated at part load that may produce power swing is also presented. Finally, the effect of head on the vibration levels for pump operation is shown and analyzed.
CitationValero, M., Egusquiza, M., Egusquiza, E., Presas, A., Valentin, D., Bossio, M. Extension of operating range in pump-turbines. Influence of head and load. "Energies", 19 Desembre 2017, vol. 10, núm. 12, p. 1-17.
URIhttp://hdl.handle.net/2117/116307
DOI10.3390/en10122178
ISSN1996-1073
Publisher versionhttp://www.mdpi.com/1996-1073/10/12/2178
Collections
Share: