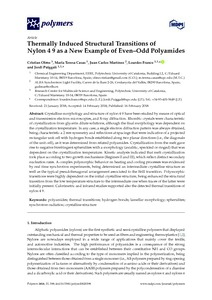 Document typeArticle
Rights accessOpen Access
Abstract
Crystalline morphology and structure of nylon 4 9 have been studied by means of optical and transmission electron microscopies, and X-ray diffraction. Rhombic crystals were characteristic of crystallization from glycerin dilute solutions, although the final morphology was dependent on the crystallization temperature. In any case, a single electron diffraction pattern was always obtained, being characteristic a 2 mm symmetry and reflections at spacings that were indicative of a projected rectangular unit cell with hydrogen bonds established along two planar directions (i.e., the diagonals of the unit cell), as it was determined from related polyamides. Crystallization from the melt gave rise to negative birefringent spherulites with a morphology (axialitic, speckled or ringed) that was dependent on the crystallization temperature. Kinetic analysis indicated that melt crystallization took place according to two growth mechanisms (Regimes II and III), which reflect distinct secondary nucleation rates. A complex polymorphic behavior on heating and cooling processes was evidenced by real time synchrotron experiments, being determined an intermediate crystalline structure as well as the typical pseudohexagonal arrangement associated to the Brill transition. Polymorphic transitions were highly dependent on the initial crystalline structure, being enhanced the structural transition from the low temperature structure to the intermediate one when traces of the latter were initially present. Calorimetric and infrared studies supported also the detected thermal transitions of nylon 4 9.
CitationOlmo, C., Casas, M., Martínez, J. C., Franco, M., Puiggali, J. Thermally induced structural transitions of nylon 4 9 as a new example of even-odd polyamides. "Polymers", 16 Febrer 2018, vol. 10, núm. 2, p. 198-222.
URIhttp://hdl.handle.net/2117/116246
DOI10.3390/polym10020198
ISSN2073-4360
Publisher versionhttp://www.mdpi.com/2073-4360/10/2/198
Collections
Share: