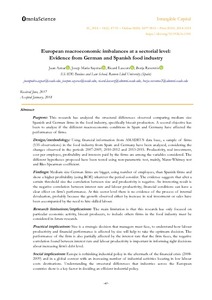 Show full item record
Aznar, Juan Pedro
Sayeras, Josep M.
Lascorz, Ricard
Raventós, Borja
Document typeArticle
PublisherOmniaScience
Rights accessOpen Access
Abstract
P u r p o s e: This research has analyzed the structural differences observed comparing medium size Spanish and German firms in the food industry, specifically biscuit production. A second objective has been to analyze if the different macroeconomic conditions in Spain and Germany have affected the performance of firms. Design/methodology: Using financial information from AMADEUS data base, a sample of firms (135 observations) in the food industry from Spain and Germany have been analyzed, considering the changes observed in the periods 2007-2009, 2010-2012 and 2013-2015. Productivity, real investment, cost per employee, profitability and interests paid by the firms are among the variables considered. The different hypotheses proposed have been tested using non-parametric test, mainly, Mann-Whitney test and Rho Spearman coefficient. Findings: Medium size German firms are bigger, using number of employees, than Spanish firms and show a higher profitability (using ROE) whatever the period consider. The evidence suggests that after a certain threshold size the correlation between size and productivity is negative. An interesting result is the negative correlation between interest rate and labour productivity; financial conditions can have a clear effect on firm’s performance. At this sector level there is no evidence of the process of internal devaluation, probably because the growth observed either by increase in real investment or sales have been accompanied by the need to hire skilled labour. Research limitations/implications: The main limitation is that this research has only focused on particular economic activity, biscuit producers, to include others firms in the food industry must be considered in future research. Practical implications: Size is a strategic decision that managers must face, to understand how labour productivity and financial performance is affected by size will help to take the optimum decision. The performance of the firm is also partially affected by the interest rate that the firm faces, the negative correlation found between interest rate and labour productivity is important in informing right decisions about increasing firm’s debt level. Social implications: Europe is rethinking industrial policy in the aftermath of the financial crisis (20082009) and in a global context with an increasing number of industrial activities locating in low labour costs destinations. Understanding the structural differences that industries across the European countries show is a key factor in deciding an efficient industrial policy. Originality/value: The last decade has accentuated the macroeconomic differences, in terms of long term interest rates or levels of unemployment between the core of Europe, Germany, and the periphery, including countries like Spain. This research is one the first ones in analyzing how these differences are affecting financial performance and structural differences in a particular industry, that is one of the most important exporters of the European Union.
Location
1: Sol, 28013 Madrid, Espanya
2: Spandauer Str./Marienkirche (Berlin), 10178 Berlin, Alemanya
CitationAznar, J. P. [et al.]. European macroeconomic imbalances at a sectorial level: Evidence from German and Spanish food industry. "Intangible Capital", Febrer 2018, vol. 14, núm. 1, p. 47-55.
URIhttp://hdl.handle.net/2117/116215
DOI10.3926/ic.1101
DLB-33375-2004
ISSN1697-9818
Collections
Share: