Aircraft clouds: from chemtrail pseudoscience to the science of contrails 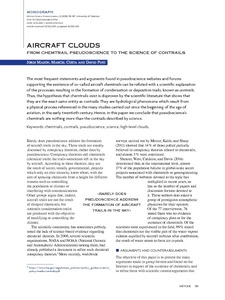 Document typeArticle
Rights accessOpen Access
Abstract
The most frequent statements and arguments found in pseudoscience websites and forums supporting the existence of so-called aircraft chemtrails can be refuted with a scientific explanation of the processes resulting in the formation of condensation or deposition trails, known as contrails. Thus, the hypothesis that chemtrails exist is disproven by the scientific literature that shows that they are the exact same entity as contrails: They are hydrological phenomena which result from a physical process referenced in the many studies carried out since the beginning of the age of aviation, in the early twentieth century. Hence, in this paper we conclude that pseudoscience’s chemtrails are nothing more than the contrails described by science.
CitationMazon, J., Costa, M., Pino, D. Aircraft clouds: from chemtrail pseudoscience to the science of contrails. "Mètode Science Studies Journal", 3 Abril 2018, vol. 8, p. 1-7.
URIhttp://hdl.handle.net/2117/116190
DOI10.7203/metode.8.9954
ISSN2174-9191
Publisher versionhttps://ojs.uv.es/index.php/Metode/article/view/9954
Collections
Share: