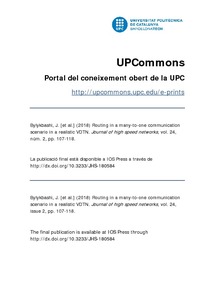 Document typeArticle
Rights accessOpen Access
All rights reserved. This work is protected by the corresponding intellectual and industrial property rights. Without prejudice to any existing legal exemptions, reproduction, distribution, public communication or transformation of this work are prohibited without permission of the copyright holder
Abstract
In this paper, we evaluate and compare the performance of different routing protocols in a many-to-one communication within a Vehicular Delay Tolerant Network (VDTN). Seven groups with three stationary sensor nodes sense the temperature, humidity and wind speed and send these data to a stationary destination node that collect them for statistical and data analysis purposes. Vehicles moving in Tirana city roads in Albania during the opportunistic contacts will exchange the sensed data to destination node. The simulations are conducted with the Opportunistic Network Environment (ONE) simulator. For the simulations we considered two different scenarios where the distance of the source nodes from the destination is short and long. For both scenarios the effect of node density, ttl and node movement model is evaluated. The performance is analyzed using delivery probability, overhead ratio, average latency, average number of hops and average buffer time metrics. The simulation results show that the increase of node density increases the delivery probability for all protocols and both scenarios, and better results are achieved when shortest-path map-based movement model is used. The increase of ttl slightly affects the performance of all protocols. By increasing the distance between source nodes and destination node, delivery probability is decreased almost 10% for all protocols, the overhead for sprayandwait protocol does not change, but for other protocols is slightly increased and the average number of hops and average latency is increased.
CitationBylykbashi, K., Spaho, E., Barolli, L., Xhafa, F. Routing in a many-to-one communication scenario in a realistic VDTN. "Journal of high speed networks", 2018, vol. 24, núm. 2, p. 107-118.
URIhttp://hdl.handle.net/2117/116183
DOI10.3233/JHS-180584
ISSN0926-6801
Publisher versionhttps://content.iospress.com/articles/journal-of-high-speed-networks/jhs584
Collections
Share: