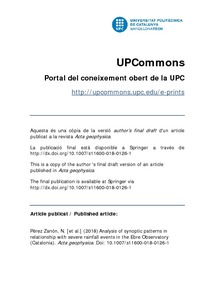 Redaño Xipell, Angel
Solé, J. Germán
Document typeArticle
Rights accessOpen Access
All rights reserved. This work is protected by the corresponding intellectual and industrial property rights. Without prejudice to any existing legal exemptions, reproduction, distribution, public communication or transformation of this work are prohibited without permission of the copyright holder
Abstract
The study has obtained a classification of the synoptic patterns associated with a selection of extreme rain episodes registered in the Ebre Observatory between 1905 and 2003, showing a return period of not less than 10 years for any duration from 5 min to 24 h. These episodes had been previously classified in four rainfall intensity groups attending to their meteorological time scale. The synoptic patterns related to every group have been obtained applying a multivariable analysis to three atmospheric levels: sea-level pressure, temperature, and geopotential at 500 hPa. Usually, the synoptic patterns associated with intense rain in southern Catalonia are featured by low-pressure systems advecting warm and wet air from the Mediterranean Sea at the low levels of the troposphere. The configuration in the middle levels of the troposphere is dominated by negative anomalies of geopotential, indicating the presence of a low or a cold front, and temperature anomalies, promoting the destabilization of the atmosphere. These configurations promote the occurrence of severe convective events due to the difference of temperature between the low and medium levels of troposphere and the contribution of humidity in the lowest levels of the atmosphere.
Location
1: 43520 Observatori de l'Ebre, Tarragona, Espanya
CitationPérez, N., M. Carmen Casas-Castillo, Peña, J., Aran, M., Rodriguez, R., Redaño, A., Solé, J. G. (2018) Analysis of synoptic patterns in relationship with severe rainfall events in the Ebre Observatory (Catalonia). "Acta geophysica", vol. 66, num. 3, p. 405-414.
URIhttp://hdl.handle.net/2117/116180
DOI10.1007/s11600-018-0126-1
ISSN1895-6572
Publisher versionhttps://link.springer.com/article/10.1007/s11600-018-0126-1
Other identifiershttp://rdcu.be/JIBb
Collections
Share: