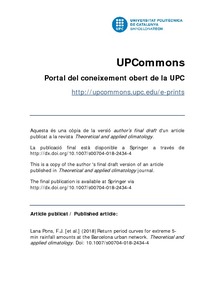 Document typeArticle
Rights accessOpen Access
All rights reserved. This work is protected by the corresponding intellectual and industrial property rights. Without prejudice to any existing legal exemptions, reproduction, distribution, public communication or transformation of this work are prohibited without permission of the copyright holder
Abstract
Heavy rainfall episodes are relatively common in the conurbation of Barcelona and neighbouring cities (NE Spain), usually due to storms generated by convective phenomena in summer and eastern and south-eastern advections in autumn. Prevention of local flood episodes and right design of urban drainage have to take into account the rainfall intensity spread instead of a simple evaluation of daily rainfall amounts. The database comes from 5-min rain amounts recorded by tipping buckets in the Barcelona urban network along the years 1994–2009. From these data, extreme 5-min rain amounts are selected applying the peaks-over-threshold method for thresholds derived from both 95% percentile and the mean excess plot. The return period curves are derived from their statistical distribution for every gauge, describing with detail expected extreme 5-min rain amounts across the urban network. These curves are compared with those derived from annual extreme time series. In this way, areas in Barcelona submitted to different levels of flood risk from the point of view of rainfall intensity are detected. Additionally, global time trends on extreme 5-min rain amounts are quantified for the whole network and found as not statistically significant.
Location
1: Barcelona, Espanya
CitationLana, F.J., M. Carmen Casas-Castillo, Serra, C., Rodriguez, R., Redaño, A., Burgueño, A., Martinez, M.D. Return period curves for extreme 5-min rainfall amounts at the Barcelona urban network. "Theoretical and applied climatology", Febrer 2019, vol. 135, núm. 3-4, p. 1243-1257.
URIhttp://hdl.handle.net/2117/116176
DOI10.1007/s00704-018-2434-4
ISSN0177-798X
Publisher versionhttps://link.springer.com/article/10.1007/s00704-018-2434-4
Other identifiershttp://rdcu.be/IumN
Collections
Share: