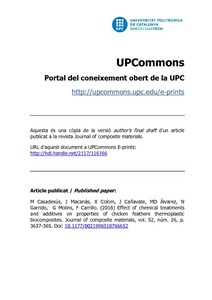 Document typeArticle
Rights accessOpen Access
All rights reserved. This work is protected by the corresponding intellectual and industrial property rights. Without prejudice to any existing legal exemptions, reproduction, distribution, public communication or transformation of this work are prohibited without permission of the copyright holder
ProjectMATERIALES COMPUESTOS MAS SOSTENIBLES FABRICADOS A PARTIR DE LA VALORIZACION DE RESIDUOS DE PLUMA DE AVE (MINECO-MAT2015-65392-C2-1-R)
Abstract
The valorization of chicken feathers (CFs) waste was researched in this work through the preparation of composites using ground chicken feathers as a filler (20 % v/v) and polypropylene (PP) or low-density polyethylene (LDPE) matrices. In order to improve the compatibility between CFs and the matrixes two different strategies were followed. First, by the chemical modification of the CFs by either acetylation or silanization and, second, by the addition of adhesion promoters like maleated polypropylene (MAPP) and maleatead polyethylene (MAPE). The effect of those treatments on the physical, mechanical and structural properties of the thermoplastic-CFs biocomposites, which are mainly related to the fibre–matrix compatibility, was analyzed. Results show that the addition of 20 % (vol/vol) of unmodified CFs to the thermoplastic matrices results in a significant decrease of the tensile strength associated to a weak interfacial adhesion was assessed by SEM. However, when the adhesion promoters were added to the mixture, a significant increase in the tensile strength was noticed, particularly when the composites were obtained by a process at 180 °C. On the contrary, acetylation and silane treatments of the CFs did not result in any practical improvement of the macroscopic properties of the biocomposites
CitationCasadesus, M., Macanás, J., Colom, X., Cañavate, J., M.D. Alvarez, Garrido, N., Molins, G., Carrillo, F. Effect of chemical treatments and additives on properties of chicken feathers thermoplastic biocomposites. "Journal of composite materials", 2018, vol. 52, núm. 26, p. 3637-365.
URIhttp://hdl.handle.net/2117/116166
DOI10.1177/0021998318766652
ISSN0021-9983
Publisher versionhttp://journals.sagepub.com/doi/abs/10.1177/0021998318766652
Collections
Share: