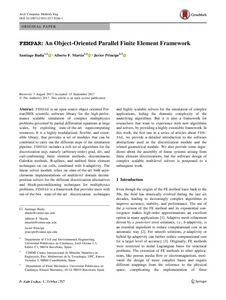 Document typeArticle
Rights accessOpen Access
Abstract
FEMPAR is an open source object oriented Fortran200X scientific software library for the high-performance scalable simulation of complex multiphysics problems governed by partial differential equations at large scales, by exploiting state-of-the-art supercomputing resources. It is a highly modularized, flexible, and extensible library, that provides a set of modules that can be combined to carry out the different steps of the simulation pipeline. FEMPAR includes a rich set of algorithms for the discretization step, namely (arbitrary-order) grad, div, and curl-conforming finite element methods, discontinuous Galerkin methods, B-splines, and unfitted finite element techniques on cut cells, combined with h-adaptivity. The linear solver module relies on state-of-the-art bulk-asynchronous implementations of multilevel domain decomposition solvers for the different discretization alternatives and block-preconditioning techniques for multiphysics problems. FEMPAR is a framework that provides users with out-of-the-box state-of-the-art discretization techniques and highly scalable solvers for the simulation of complex applications, hiding the dramatic complexity of the underlying algorithms. But it is also a framework for researchers that want to experience with new algorithms and solvers, by providing a highly extensible framework. In this work, the first one in a series of articles about FEMPAR, we provide a detailed introduction to the software abstractions used in the discretization module and the related geometrical module. We also provide some ingredients about the assembly of linear systems arising from finite element discretizations, but the software design of complex scalable multilevel solvers is postponed to a subsequent work.
CitationBadia, S., Martín, A. F., Principe, J. FEMPAR: an object-oriented parallel finite element framework. "Archives of computational methods in engineering", Abril 2018, vol. 25, núm. 2, p. 195-271.
URIhttp://hdl.handle.net/2117/116124
DOI10.1007/s11831-017-9244-1
ISSN1134-3060
Publisher versionhttps://link.springer.com/article/10.1007%2Fs11831-017-9244-1
Other identifiershttps://arxiv.org/abs/1708.01773
Collections
Share: