High-resolution spectra of sprites and halos with GRASSP 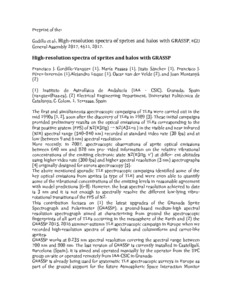 Document typeConference report
Rights accessOpen Access
Abstract
The first and simultaneous spectroscopic campaigns of TLEs were carried out in the mid 1990s [1, 2], soon after the discovery of TLEs in 1989 [3]. These initial campaigns provided preliminary results on the optical emissions of TLEs corresponding to the first positive system (FPS) of N2(B3¿g) ¿ N2(A3S+u ) in the visible and near infrared (NIR) spectral range (540–840 nm) recorded at standard video rate (30 fps) and at low (between 9 and 6 nm) spectral resolution. More recently, in 2007, spectroscopic observations of sprite optical emissions between 640 nm and 820 nm pro- vided information on the relative vibrational concentrations of the emitting electronic state N2(B3¿g, v’) at differ- ent altitudes using higher video rate (300 fps) and higher spectral resolution (3 nm) spectrographs [4] originally designed for aurora spectroscopy [5]. The above mentioned sporadic TLE spectroscopic campaigns identified some of the key optical emissions from sprites (a type of TLE) and were even able to quantify some of the vibrational concentrations of the emitting levels in reasonable agreement with model predictions [6–8]. However, the best spectral resolution achieved to date is 3 nm and it is not enough to spectrally resolve the different low-lying vibro-rotational transitions of the FPS of N2. This contribution focuses on (1) the latest upgrades of the GRanada Sprite Spectrograph and Polarimeter (GRASSP), a ground-based medium-high spectral resolution spectrograph aimed at characterizing from ground the spectroscopic fingerprints of all sort of TLEs occurring in the mesosphere of the Earth and (2) the GRASSP 2015, 2016 summer-autumn TLE spectroscopic campaign in Europe when we recorded high-resolution spectra of sprite halos and columniform and carrot-like sprites. GRASSP works at 0.235 nm spectral resolution covering the spectral range between 700 nm and 800 nm. The last version of GRASSP is currently installed in Castellgalí, Barcelona (Spain), it is aimed and operated manually by the operator from the UPC group on-site or operated remotely from IAA-CSIC in Granada.
CitationGordillo Vázquez, F., Passas, M., Sánchez, J., Pérez Invernón, F. J., Luque, A., Van Der Velde, O., Montaña, J. High-resolution spectra of sprites and halos with GRASSP. A: European Geosciences Union General Assembly. "European Geosciences Union General Assembly 2017". 2017, p. 4611.
URIhttp://hdl.handle.net/2117/116109
Publisher versionhttp://meetingorganizer.copernicus.org/EGU2017/EGU2017-4611.pdf
Collections
Share: