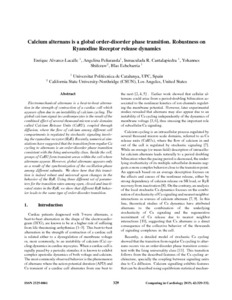 Electromechanical alternans is a beat-to-beat alterna- tion in the strength of contraction of a cardiac cell which appears often due to an instability of calcium cycling. The global calcium signal in cardiomyocytes is the result of the combined effect of several thousand micron scale domains called Calcium Release Units (CaRU), coupled through diffusion, where the flow of calcium among different cell compartments is regulated by stochastic signaling involv- ing the ryanodine receptor (RyR). Recently, numerical sim- ulations have suggested that the transition from regular Ca cycling to alternans is an order-disorder phase transition consistent with the Ising universality class. Inside the cell, groups of CaRU form transient areas within the cell where alternans appear. However, global alternans appears only as a result of the synchronization of the oscillation phase among different subunits. We show here that this transi- tion is indeed robust and universal upon changes in the behavior of the RyR. Using three different set of parame- ters for the transition rates among open, closed and inacti- vated states in the RyR, we show that different RyR behav- ior leads to the same type of order-disorder transition.
CitationAlvarez-Lacalle, E., Peñaranda, A., Rodriguez Cantalapiedra, I., Shiferaw, Y., Echebarria, B. Calcium alternans is a global order-disorder phase transition: robustness on ryanodine receptor release dynamics. "Computing in Cardiology", 1 Gener 2016, vol. 42, p. 329-332.
URIhttp://hdl.handle.net/2117/116099
ISSN2325-8861
Publisher versionhttp://www.cinc.org/archives/2015/pdf/0329.pdf