DNS of falling droplets in a vertical channel 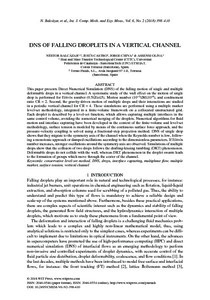 Document typeArticle
PublisherWIT Press
Rights accessOpen Access
Abstract
This paper presents Direct Numerical Simulation (DNS) of the falling motion of single and multiple deformable drops in a vertical channel. A systematic study of the wall effect on the motion of single drop is performed for Eötvös number (0.5=Eo=5), Morton number (10-3=M=10-8), and confinement ratio CR = 2. Second, the gravity-driven motion of multiple drops and their interactions are studied in a periodic vertical channel for CR = 4. These simulations are performed using a multiple marker level-set methodology, integrated in a finite-volume framework on a collocated unstructured grid. Each droplet is described by a level-set function, which allows capturing multiple interfaces in the same control volume, avoiding the numerical merging of the droplets. Numerical algorithms for fluid motion and interface capturing have been developed in the context of the finite-volume and level-set methodology, surface tension is modeled by means of the continuous surface force approach, and the pressure-velocity coupling is solved using a fractional-step projection method. DNS of single drop shows that they migrate to the symmetry axis of the channel when the Reynolds number is low, following a monotonic approach or damped oscillations according to the dimensionless parameters. If Eötvös number increases, stronger oscillations around the symmetry axis are observed. Simulations of multiple drops show that the collision of two drops follows the drafting-kissing tumbling (DKT) phenomenon. Deformable drops do not collide with the wall, whereas DKT phenomenon in the droplet swarm leads to the formation of groups which move through the center of the channel.
Description
© 2018 WIT Press
CitationBalcázar, N., Castro, J., Chiva, J., Oliva, A. DNS of falling droplets in a vertical channel. "International journal of computational methods and experimental measurements", 1 Febrer 2018, vol. 6, núm. 2, p. 398-410.
URIhttp://hdl.handle.net/2117/116083
DOI10.2495/CMEM-V6-N2-398-410
ISSN2046-0554
Publisher versionhttps://www.witpress.com/elibrary/cmem-volumes/6/2/1987
Collections
Share: