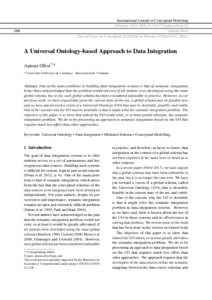 Document typeArticle
Rights accessOpen Access
Abstract
One of the main problems in building data integration systems is that of semantic integration. It has been acknowledged that the problem would not exist if all systems were developed using the same global schema, but so far, such global schema has been considered unfeasible in practice. However, in our previous work, we have argued that given the current state-of-the-art, a global schema may be feasible now, and we have put forward a vision of a Universal Ontology (UO) that may be desirable, feasible, and viable. One of the reasons why the UO may be desirable is that it might solve the semantic integration problem. The objective of this paper is to show that indeed the UO could solve, or at least greatly alleviate, the semantic integration problem. We do so by presenting an approach to semantic integration based on the UO that requires much less effort than other approaches.
CitationOlivé, A. A universal ontology-based approach to data integration. "Enterprise modelling and information systems architectures: International journal of conceptual modeling", 27 Febrer 2018, vol. 13, p. 110-119.
URIhttp://hdl.handle.net/2117/115967
DOI10.18417/emisa.si.hcm.10
Publisher versionhttps://www.emisa-journal.org/emisa/article/view/193
Collections
Share: