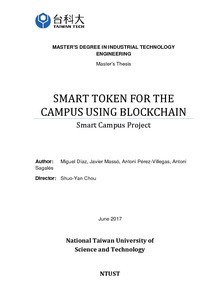 CovenanteeGuo li Taiwan ke ji da xue
Document typeBachelor thesis
Rights accessOpen Access
Abstract
This project was born from the idea of creating a complete and functional Smart Campus on the National Taiwan University of Science and Technology (from now on NTUST). The NTUST, one of the most excellence universities not only in Taipei City, but also all around Taiwan, has a large reputation in all types of engineering. Along the years, the university has been able to adapt to new technologies and new trends. In this new world wide environment of Internet of Things (IoT), the university wants to lead an interdepartmental project to create a SMART CAMPUS as functional and effective as possible. According to this objective, between the writer and Professor Shuo-Yan Chou the idea of implementing a micro-economy system based in new technologies such as blockchain was thought as a revolutionary further step to develop in the project.
SubjectsBlockchains (Databases), Campus
URIhttp://hdl.handle.net/2117/115935
Collections
Share: