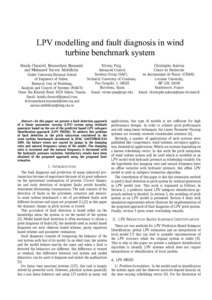 Aubrun, C
Document typeArticle
Rights accessOpen Access
Abstract
In order to keep away wind turbines from catastrophic conditions due to sudden breakdowns, it is important to detect faults as soon as possible. For diagnosis, a model-based approach is chosen. There are many works that use this fault detection design, but the majority of them consider this system as a linear time invariant (LTI) model. The objective of this paper is, first, to find an LPV model of the system using the subspace identification technique of linear parameter-varying (LPV). Second, we focus on fault diagnosis based on residual generation which is obtained as a comparison between the measured variable and the estimated one using this LPV model. In this work, a benchmark of a wind turbine case is proposed with six predefined faults (three sensor fault scenarios, two actuator fault scenarios and a system fault scenario).
CitationChouiref, H., Boussaid, B., Abdelkrim, M., Puig, V., Aubrun, C. An LPV modelling and fault diagnosis in wind turbine benchmark system. "International journal of modeling, identification and control", 1 Juliol 2017, vol. 27, núm. 4, p. 243-255.
URIhttp://hdl.handle.net/2117/115909
DOI10.1504/IJMIC.2017.084718
ISSN1746-6172
Publisher versionhttp://www.inderscience.com/offer.php?id=84718
Collections
Share: