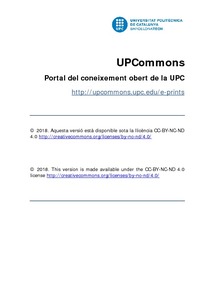 Tipus de documentArticle
EditorElsevier
Condicions d'accésAccés obert
Abstract
The physical aging behaviour of two epoxy-thiol shape memory polymers has been studied: diglycidyl ether of bisphenol-A cross-linked with pentaerythritol tetrakis, denoted 4-thiol, with a calorimetric glass transition temperature, Tg, of 51 °C; and the same system modified with tri (2,3-epoxypropyl)isocyanurate in a 30 wt% proportion, denoted 4-thiol-30%iso, with Tg = 63 °C. The aging of both polymers has been measured by torsional creep for aging temperatures between room temperature and the Tg of each polymer. The creep behaviour of each polymer is characterised by a discrete distribution of relaxation times, which shifts with aging time according to a double logarithmic aging rate, µ, and with aging temperature according to an activation energy. The distribution of creep relaxation times for 4-thiol is rather symmetrical, and slightly narrower than that for 4-thiol-30%iso, which is also skewed to longer times. The dependence of µ on temperature displays a peak as the aging temperature reduces below Tg, and is sharper for 4-thiol, in accordance with the narrower distribution, as predicted by a theoretical model based upon structural relaxation kinetics. The other parameters defining the aging behaviour, namely the reduced activation energy (¿h*/R = 92 kK for 4-thiol and 82 kK for 4-thiol-30%iso) and the non-linearity parameter of structural relaxation (x = 0.35 for 4-thiol and 0.25 for 4-thiol-30%iso), have been determined experimentally and are compared with the predictions of the theoretical model. These parameters can be used to predict the effects of physical aging on the shape memory response.
Descripció
© 2017. This version is made available under the CC-BY-NC-ND 4.0 license http://creativecommons.org/licenses/by-nc-nd/4.0/
CitacióHutchinson, J.M., Cortes, M. Physical aging of shape memory polymers based upon epoxy-thiol “click” systems. "Polymer testing", 1 Febrer 2018, vol. 65, p. 480-490.
URIhttp://hdl.handle.net/2117/115887
DOI10.1016/j.polymertesting.2017.12.024
ISSN0142-9418
Versió de l'editorhttp://www.sciencedirect.com/science/article/pii/S0142941817313843?via%3Dihub
Col·leccions
Comparteix: