On the mechanisms of natural transport in the solar system 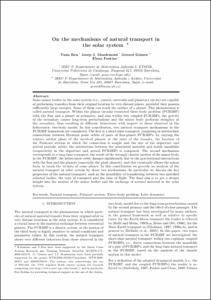 Except where otherwise noted, content on this work is licensed under a Creative Commons license : Attribution-NonCommercial-NoDerivs 3.0 Spain
Abstract
Some minor bodies in the solar system (i.e., comets, asteroids and planetary ejecta) are capable of performing transfers from their original location to very distant places, provided they possess sufficiently large energies. Some of them can reach the surface of a planet. This phenomenon is called natural transport. Within the planar circular restricted three-body problem (PCR3BP) with the Sun and a planet as primaries, and also within two coupled PCR3BPs, the gravity of the secondary causes long-term perturbations and the minor body performs swingbys at the secondary, thus resulting in different behaviours with respect to those observed in the heliocentric two-body model. In this contribution, two natural transport mechanisms in the PCR3BP framework are considered. The first is a short-time transport, consisting in heteroclinic connections between libration point orbits of pairs of Sun-planet PCR3BPs: by varying the relative orbital phase of the involved planets at the start of the transfer, the location of the Poincar´e section at which the connection is sought and the size of the departure and arrival periodic orbits, the intersection between the associated unstable and stable manifolds (respectively in the departure and arrival PCR3BP) is computed. The second mechanism corresponds to a long-time transport, the result of the strongly chaotic motion of the minor body in the PCR3BP: the heliocentric orbit changes significantly due to the gravitational interactions with the Sun and the planets (especially the giant planets), and this eventually allows the minor body to reach the vicinity of some planet. In this contribution we provide an analysis of the natural transport in solar system by these two mechanisms. In particular we discuss the key properties of the natural transport, such as the possibility of transferring between two specified celestial bodies, the type of transport and the time of flight. The final aim is to get a deeper insight into the motion of the minor bodies and the exchange of natural material in the solar system.
CitationMasdemont, J.J. [et al.]. On the mechanisms of natural transport in the solar system. A: Conference on Nonlinear Science and Complexity. "3rd Conference on Nonlinear Science and Complexity NCS10". Ankara: 2010, p. 1-6.
URIhttp://hdl.handle.net/2117/11560
Publisher versionhttp://nsc10.cankaya.edu.tr/proceedings/PAPERS/Symp5-Celestial%20Mechanics%20and%20Dynamical%20Astronomy%20Methods%20and%20Applications/Paper47.pdf
Collections
Share: