A simple spatiotemporal evolution model of a transmission power grid 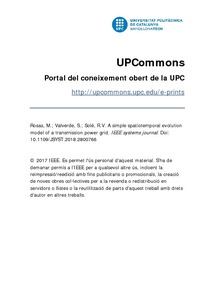 Valverde, Sergi
Solé, Ricard Vicenç
Document typeArticle
Rights accessOpen Access
All rights reserved. This work is protected by the corresponding intellectual and industrial property rights. Without prejudice to any existing legal exemptions, reproduction, distribution, public communication or transformation of this work are prohibited without permission of the copyright holder
Abstract
In this paper, we present a model for the spatial and temporal evolution of a particularly large human-made network: the 400-kV French transmission power grid. This is based on 1) an attachment procedure that diminishes the connection probability between two nodes as the network grows and 2) a coupled cost function characterizing the available budget at every time step. Two differentiated and consecutive processes can be distinguished: a first global space-filling process and a secondary local meshing process that increases connectivity at a local level. Results show that even without power system engineering design constraints (i.e., population and energy demand), the evolution of a transmission network can be remarkably explained by means of a simple attachment procedure. Given a distribution of resources and a time span, the model can also be used to generate the probability distribution of cable lengths at every time step, thus facilitating network planning. Implications for network's fragility are suggested as a starting point for new design perspectives in this kind of infrastructures.
CitationRosas-Casals, M., Valverde, S., Solé, R. V. A simple spatiotemporal evolution model of a transmission power grid. "IEEE systems journal", vol. 12, num. 4, p. 3747-3754.
URIhttp://hdl.handle.net/2117/115579
DOI10.1109/JSYST.2018.2800766
ISSN1932-8184
Publisher versionhttp://ieeexplore.ieee.org/document/8300517/
Collections
Share: