Output-feedback IDA stabilisation of an SMIB system using a TCSC 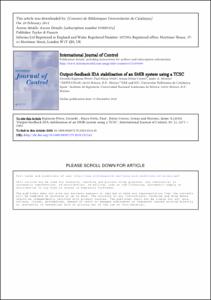 Interconnection and damping assignment (IDA) passivity-based control (PBC) is currently a well-known viable alternative for solving regulation control problems of a wide class of nonlinear systems. However, a distinctive feature that, in spite of its appearance under several applications, has not been exhaustively exploited, is the flexibility that this technique exhibits for designing output-feedback controllers (OFCs). The purpose of this article is to illustrate this attractive characteristic by approaching the (practically important) case study given by the improvement of the transient stability properties of power systems. The particular system composed by a synchronous generator connected to an infinite bus via a thyristor controlled series capacitor is considered. Two OFCs are presented, one that does not involve the unmeasurable state and another that, although including this state, presents some input-to-state stability properties that allow for establishing a sort of separation principle concerning an observer-based structure for the closed-loop system. The advantages of both controllers are illustrated by numerical simulations when a three-phase short circuit at the generator bus is induced.
CitationEspinosa-Perez, G. [et al.]. Output-feedback IDA stabilisation of an SMIB system using a TCSC. "International journal of control", 12 Desembre 2010, vol. 83, núm. 12, p. 2471-2482.
URIhttp://hdl.handle.net/2117/11556
DOI10.1080/00207179.2010.531145
ISSN0020-7179
Publisher versionhttp://www.informaworld.com/smpp/content~db=all?content=10.1080/00207179.2010.531145