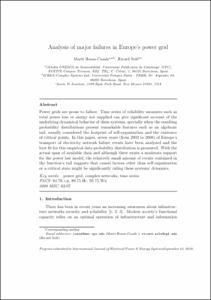 Solé, Ricard V.
Document typeArticle
Rights accessOpen Access
All rights reserved. This work is protected by the corresponding intellectual and industrial property rights. Without prejudice to any existing legal exemptions, reproduction, distribution, public communication or transformation of this work are prohibited without permission of the copyright holder
Abstract
Power grids are prone to failure. Time series of reliability measures such as total power loss or energy not supplied can give significant account of the underlying dynamical behavior of these systems, specially when the resulting probability distributions present remarkable features such as an algebraic tail, usually considered the footprint of self-organization and the existence of critical points. In this paper, 7 years (from 2002 to 2008) of Europe’s transport of electricity network failure events have been analyzed and the best fit for this empirical data probability distribution is presented. With the actual span of available data and although there exists a moderate support for the power-law model, the relatively small amount of events contained in the function’s tail suggests that causal factors other than self-organization or a critical state might be significantly ruling these systems’ dynamics.
CitationRosas-Casals, M.; Solé, R. Analysis of major failures in Europe’s power grid. "International journal of electrical power and energy systems", Març 2011, vol. 33, núm. 3, p. 805-808.
URIhttp://hdl.handle.net/2117/11554
DOI10.1016/j.ijepes.2010.11.014
ISSN0142-0615
Collections
Share: