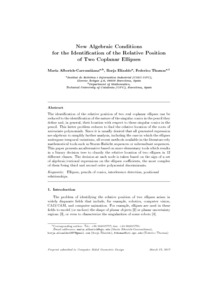 Document typeArticle
Rights accessOpen Access
Abstract
The identification of the relative position of two real coplanar ellipses can be reduced to the identification of the nature of the singular conics in the pencil they define and, in general, their location with respect to these singular conics in the pencil. This latter problem reduces to find the relative location of the roots of univariate polynomials. Since it is usually desired that all generated expressions are algebraic to simplify further analysis, including the case in which the ellipses undergone temporal variations, all recent methods available in the literature rely mathematical tools such as Sturm–Habicht sequences or subresultant sequences. This paper presents an alternative based on more elementary tools which results in a binary decision tree to classify the relative location of two ellipses in 12 different classes. The decision at each node is taken based on the sign of a set of algebraic/rational expressions on the ellipses coefficients, the most complex of them being third and second order polynomial discriminants.
CitationAlberich, M., Elizalde, B., Thomas, F. New algebraic conditions for the identification of the relative position of two coplanar ellipses. "Computer aided geometric design", 1 Maig 2017, vol. 54, p. 35-48.
URIhttp://hdl.handle.net/2117/115506
DOI10.1016/j.cagd.2017.03.013
ISSN0167-8396
Publisher versionhttp://www.sciencedirect.com/science/article/pii/S0167839617300791
Collections
Share: