Appraisement of planar, bending and twisting cracks in 3D with isotropic and orthotropic damage models 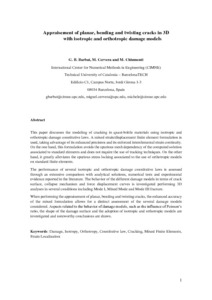 Document typeArticle
PublisherSpringer
Rights accessOpen Access
Abstract
This paper discusses the modeling of cracking in quasi-brittle materials using isotropic and orthotropic damage constitutive laws. A mixed strain/displacement finite element formulation is used, taking advantage of its enhanced precision and its enforced interelemental strain continuity. On the one hand, this formulation avoids the spurious mesh dependency of the computed solution associated to standard elements and does not require the use of tracking techniques. On the other hand, it greatly alleviates the spurious stress locking associated to the use of orthotropic models on standard finite elements. The performance of several isotropic and orthotropic damage constitutive laws is assessed through an extensive comparison with analytical solutions, numerical tests and experimental evidence reported in the literature. The behavior of the different damage models in terms of crack surface, collapse mechanism and force displacement curves is investigated performing 3D analyses in several conditions including Mode I, Mixed Mode and Mode III fracture. When performing the appraisement of planar, bending and twisting cracks, the enhanced accuracy of the mixed formulation allows for a distinct assessment of the several damage models considered. Aspects related to the behavior of damage models, such as the influence of Poisson’s ratio, the shape of the damage surface and the adoption of isotropic and orthotropic models are investigated and noteworthy conclusions are drawn.
Description
The final publication is available at Springer via http://dx.doi.org/10.1007/s10704-018-0261-3
CitationBarbat, G. B., Cervera, M., Chiumenti, M. Appraisement of planar, bending and twisting cracks in 3D with isotropic and orthotropic damage models. "International journal of fracture", Març 2018, vol. 210, núm. 1-2, p. 45-79.
URIhttp://hdl.handle.net/2117/115482
DOI10.1007/s10704-018-0261-3
ISSN1573-2673
Publisher versionhttps://link.springer.com/article/10.1007%2Fs10704-018-0261-3
Other identifiershttps://www.researchgate.net/publication/322540426_Appraisement_of_planar_bending_and_twisting_cracks_in_3D_with_isotropic_and_orthotropic_damage_models
Collections
Share: