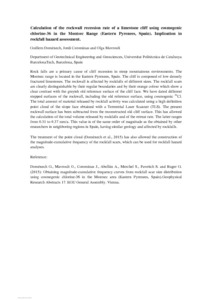 Document typeArticle
Rights accessOpen Access
Abstract
Cliff erosion may be a major problem in settled areas affecting populations and producing economic and ecological losses. In this paper we present a procedure to calculate the long-term retreat rate of a cliff affected by rockfalls in the Montsec Range, Eastern Pyrenees (Spain). It is composed of low, densely fractured limestones; and the rockwall is affected by rockfalls of different sizes. The rockfall scars are clearly distinguishable by their regular boundaries and by their orange colour, which contrast with the greyish old reference surface (S0) of the cliff face. We have dated different stepped surfaces of the rockwall, including S0, using cosmogenic 36Cl. The total amount of material released by rockfall activity was calculated using a high definition point cloud of the slope face obtained with a terrestrial laser scanner (TLS). The present rockwall surface has been subtracted from the reconstructed old cliff surface. This has allowed the calculation of the total volume released by rockfalls and of the retreat rate. The latter ranges from 0.31 to 0.37 mm·a- 1. This value is of the same order of magnitude as that obtained by other researchers in neighbouring regions in Spain, having similar geology and affected by rockfalls.
CitationDomènech, G., Corominas, J., Mavrouli, O. Calculation of the rockwall recession rate of a limestone cliff, affected by rockfalls, using cosmogenic chlorine-36: case study of the Montsec range (Eastern Pyrenees, Spain). "Geomorphology", Abril 2018, vol. 306, p. 325-335.
URIhttp://hdl.handle.net/2117/115481
DOI10.1016/j.geomorph.2017.04.005
ISSN0169-555X
Publisher versionhttps://www.sciencedirect.com/science/article/pii/S0169555X17301356
Other identifiershttps://www.researchgate.net/publication/280731404_Calculation_of_the_rockwall_recession_rate_of_a_limestone_cliff_using_cosmogenic_chlorine-36_in_the_Montsec_Range_Eastern_Pyrenees_Spain_Implication_in_rockfall_hazard_assessment
Collections
Share: