Music quartet based on a PSoC 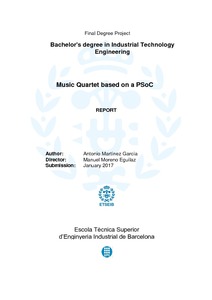 Except where otherwise noted, content on this work is licensed under a Creative Commons license : Attribution-NonCommercial-NoDerivs 3.0 Spain
Abstract
This report details the migration process of the Quartet code from a Microchip PIC24 microcontroller, which was previously migrated by Pau Mendieta from a Microchip PIC18 microcontroller, to a CY8CKIT-042-BLE PSoC 4 microcontroller manufactured by Cypress Semiconductor. It also explains how several improvements, both in sound quality and program functionality, have been implemented into the final program once the migration was completed. The original Quartet code, developed by Victor Timofeev, synthesized 4 different voices (two guitars, a violin and a bass) coordinated by a conductor task, each of which played from its own music sheet, which was stored in ROM. The sound samples were generated using amplitude modulation: the characteristic waveform of the instrument (also stored in ROM) and its amplitude envelope (generated through software) were multiplied, and later exported through an 8-bit PWM running at 78 kHz. These could later be played on speakers with the help of an RC filter. The project was carried out by continuously testing the software on the actual microcontroller. Moreover, data was extracted from these tests and compared with the simulation of Pere Domenech’s PIC18 code. A great use of the example projects provided by Cypress Semiconductor, which demonstrate the features of the PSoC 4 through simple applications, has also been made. It was also essential to analyze different signals with an oscilloscope at the laboratory. The program obtained after completing the project exports the audio signal through a 16-bit PWM running at 92 kHz and includes an extra voice (a second violin), more accurate characteristic waveforms and improved amplitude envelopes, as well as added functionality, such as an extra octave and a wider note frequency range. The report first presents the basic operation of the original code, which was carefully studied at the beginning of the project. Then, it explains how the OS (FreeRTOS) and the program were migrated, along with the extensive troubleshooting process that followed. Moreover, it details the improvements that were made once the code worked correctly. Finally, suggestions are made for future improvements.
SubjectsMicrocontrollers, Sound Recording and reproducing -- Digital techniques, Microcontroladors, So -- Enregistrament i reproducció -- Tècniques digitals
DegreeGRAU EN ENGINYERIA EN TECNOLOGIES INDUSTRIALS (Pla 2010)
URIhttp://hdl.handle.net/2117/115480
Collections
Share: