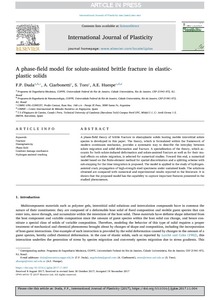 Document typeArticle
Rights accessOpen Access
European Commission's projectCOMP-DES-MAT - Advanced tools for computational design of engineering materials (EC-FP7-320815)
Abstract
A phase-field theory of brittle fracture in elastoplastic solids hosting mobile interstitial solute species is developed in this paper. The theory, which is formulated within the framework of modern continuum mechanics, provides a systematic way to describe the interplay between solute migration and solid deformation and fracture. A specialization of the theory, which accounts for both solute-induced deformation and solute-assisted fracture as well as for their mutual effects on solute migration, is selected for numerical studies. Toward this end, a numerical model based on the finite-element method for spatial discretization and a splitting scheme with sub-stepping for the time integration is proposed. The model is applied to the study of hydrogen-assisted crack propagation of high-strength steel specimens under sustained loads. The solutions obtained are compared with numerical and experimental results reported in the literature. It is shown that the proposed model has the capability to capture important features presented in the studied phenomenon.
CitationDuda, F., Ciarbonetti, A., Toro, S., Huespe, A. A phase-field model for solute-assisted brittle fracture in elastic-plastic solids. "International journal of plasticity", Març 2018, vol. 102, p. 16-40.
URIhttp://hdl.handle.net/2117/115469
DOI10.1016/j.ijplas.2017.11.004
ISSN0749-6419
Publisher versionhttp://www.sciencedirect.com/science/article/pii/S0749641917304552
Other identifiershttps://www.researchgate.net/publication/321469746_A_phase-field_model_for_solute-assisted_brittle_fracture_in_elastic-plastic_solids
Collections
Share: