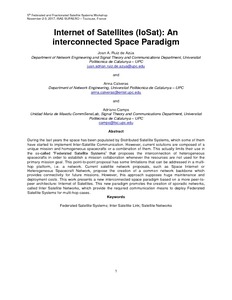 Document typeConference lecture
Rights accessOpen Access
ProjectONION - Operational Network of Individual Observation Nodes (EC-H2020-687490)
TECNICAS AVANZADAS EN TELEDETECCION APLICADA USANDO SEÑALES GNSS Y OTRAS SEÑALES DE OPORTUNIDAD (MINECO-ESP2015-70014-C2-1-R)
Abstract
During the last years the space has been populated by Distributed Satellite Systems, which some of them have started to implement Inter-Satellite Communication. However, current solutions are composed of a unique mission and homogeneous spacecrafts or a combination of them. This actually limits their use in the so-called “Federated Satellite Systems” that proposes the interconnection of heterogeneous spacecrafts in order to establish a mission collaboration whenever the resources are not used for the primary mission goal. This point-to-point proposal has some limitations that can be addressed in a multi-hop platform, i.e. a network. Current satellite network proposals, such as Space Internet or Heterogeneous Spacecraft Network, propose the creation of a common network backbone which provides connectivity for future missions. However, this approach supposes huge maintenance and deployment costs. This work presents a new interconnected space paradigm based on a more peer-to-peer architecture: Internet of Satellites. This new paradigm promotes the creation of sporadic networks, called Inter Satellite Networks, which provide the required communication means to deploy Federated Satellite Systems for multi-hop cases.
CitationRuiz de Azúa, J.A., Calveras, A., Camps, A. Internet of Satellites (IoSat): an interconnected space paradigm. A: International Federated and Fractionated Satellite Systems Workshop. "5th International Federated and Fractionated Satellite Systems Workshop: November 2-3, 2017". 2017, p. 1-8.
URIhttp://hdl.handle.net/2117/115452
Collections
Share: