Use of performance indicators in the analysis of running gait impacts 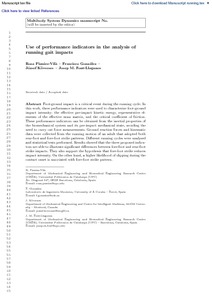 Foot-ground impact is a critical event during the running cycle. In this work, three performance indicators were used to characterize foot-ground impact intensity: the effective pre-impact kinetic energy, representative elements of the effective mass matrix, and the critical coefficient of friction. These performance indicators can be obtained from the inertial properties of the biomechanical system and its pre-impact mechanical state, avoiding the need to carry out force measurements. Ground reaction forces and kinematic data were collected from the running motion of an adult that adopted both rear-foot and fore-foot strike patterns. Different running cycles were analysed and statistical tests performed. Results showed that the three proposed indicators are able to illustrate significant differences between fore-foot and rear-foot strike impacts. They also support the hypothesis that fore-foot strike reduces impact intensity. On the other hand, a higher likelihood of slipping during the contact onset is associated with fore-foot strike pattern.
CitationPàmies-Vilà, R., González, F., Kövecses, J., Font-Llagunes, J.M. Use of performance indicators in the analysis of running gait impacts. "Multibody system dynamics", 14 Juliol 2017.
URIhttp://hdl.handle.net/2117/115445
DOI10.1007/s11044-017-9580-9
ISSN1384-5640