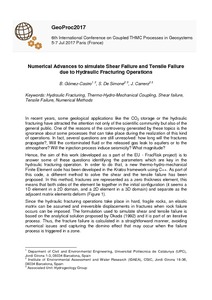 Document typeConference report
Rights accessOpen Access
Abstract
In recent years, some geological applications like the CO2 storage or the hydraulic fracturing have attracted the attention not only of the scientific community but also of the general public. One of the reasons of the controversy generated by these topics is the ignorance about some processes that can take place during the realization of this kind of operations. In fact, several questions are still unresolved: how long will the fractures propagate?, Will the contaminated fluid or the released gas leak to aquifers or to the atmosphere? Will the injection process induce seismicity? What magnitude? Hence, the aim of this work (developed as a part of the EU - FracRisk project) is to answer some of these questions identifying the parameters which are key in the hydraulic fracturing operation. In order to do that, a new thermo-hydro-mechanical Finite Element code has been developed in the Kratos framework using C++. As part of this code, a different method to solve the shear and the tensile failure has been proposed. In this method, fractures are represented as a zero thickness element, this means that both sides of the element lie together in the initial configuration (it seems a 1D element in a 2D domain, and a 2D element in a 3D domain) and separate as the adjacent matrix elements deform (Figure 1). Since the hydraulic fracturing operations take place in hard, fragile rocks, an elastic matrix can be assumed and irreversible displacements in fractures when rock failure occurs can be imposed. The formulation used to simulate shear and tensile failure is based on the analytical solution proposed by Okada (1992) and it is part of an iterative process. Thus, the fracture failure is calculated in a straightforward manner, avoiding numerical issues and capturing the domino effect that may occur when the failure process is triggered in a zone. In conclusion, the goal of this work is to analyze the main uncertainties related with the thermo-hydro-mechanical behavior of fractures derived from the hydraulic fracturing operations by means of the new code and method developed.
CitationGómez, B., De Simone, S., Carrera, J. Numerical advances to simulate shear failure and tensile failure due to hydraulic fracturing operations. A: International Conference on Coupled THMC Processes in Geosystems. "6th International Conference on Coupled THMC Processes in Geosystems: GeoProc2017: book of abstracts". 2017, p. 38-39.
URIhttp://hdl.handle.net/2117/115432
Collections
Share: