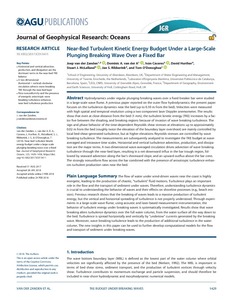 Hydrodynamics under regular plunging breaking waves over a fixed breaker bar were studied in a large-scale wave flume. A previous paper reported on the outer flow hydrodynamics; the present paper focuses on the turbulence dynamics near the bed (up to 0.10 m from the bed). Velocities were measured with high spatial and temporal resolution using a two component laser Doppler anemometer. The results show that even at close distance from the bed (1 mm), the turbulent kinetic energy (TKE) increases by a factor five between the shoaling, and breaking regions because of invasion of wave breaking turbulence. The sign and phase behavior of the time-dependent Reynolds shear stresses at elevations up to approximately 0.02 m from the bed (roughly twice the elevation of the boundary layer overshoot) are mainly controlled by local bed-shear-generated turbulence, but at higher elevations Reynolds stresses are controlled by wave breaking turbulence. The measurements are subsequently analyzed to investigate the TKE budget at wave-averaged and intrawave time scales. Horizontal and vertical turbulence advection, production, and dissipation are the major terms. A two-dimensional wave-averaged circulation drives advection of wave breaking turbulence through the near-bed layer, resulting in a net downward influx in the bar trough region, followed by seaward advection along the bar's shoreward slope, and an upward outflux above the bar crest. The strongly nonuniform flow across the bar combined with the presence of anisotropic turbulence enhances turbulent production rates near the bed.
CitationVan der Zanden, J., Van Der A, D., Caceres, I., Hurther, D., McLelland, S., Ribberink, J., O'Donoghue, T. Near-bed turbulent kinetic energy budget under a large-scale plunging breaking wave over a fixed bar. "Journal of geophysical research: oceans", 1 Gener 2018, núm. 123, p. 1429-1456.
URIhttp://hdl.handle.net/2117/115367
DOI10.1002/2017JC013411
ISSN2169-9291
Publisher versionhttp://onlinelibrary.wiley.com/doi/10.1002/2017JC013411/full