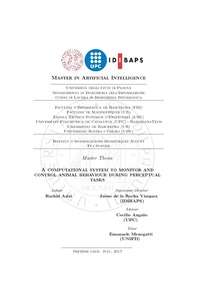 Realitzat a/ambUniversità degli Studi di Padova
Tipus de documentProjecte Final de Màster Oficial
Condicions d'accésAccés obert
Tots els drets reservats. Aquesta obra està protegida pels drets de propietat intel·lectual i industrial corresponents. Sense perjudici de les exempcions legals existents, queda prohibida la seva reproducció, distribució, comunicació pública o transformació sense l'autorització del titular dels drets
Abstract
In the neuroscience field the scientists aim to understand how the brain works. In order to study the brain mechanisms underlying behaviour and cognition, they perform standardized laboratory experiments with animal models. The main goal of this Master Thesis is the development of an experimental set-up to run behavioral experiments using rats in the DeLaRocha Lab at IDIBAPS (Institut d’Investigacions Biomédiques August Pi i Sunyer) of Barcelona. Here there are many people that are studying the brain and its features. Every day the researchers makes hypothesis and try to demonstrate it. In order to perform that, it is necessary to make many experiments. Therefore, a system that can contain the rat, run the task and obtain results is needed. Moreover, it has to control the task in an automatized way, to show in real-time some useful information about the running task to the user and to save all the data in the proper format to be read easily afterwords. The entire system is programmed using Python and an Arduino boards to communicate with the experimental devices, i.e. water valves, lights, speakers and camera. The system monitors in real time and in a quantitative manner the behavior of the animal and serves as an interface to the experimenter to assess performance, statistic about responses, etc. To make everything works the system has to be fast (real-time) in terms of communication between the hardware, response of the devices and visualization of the data. All these parts are organized to work together. The majority of the experiments are based on Two Alternative Forced-Choice (2AFC) tasks. In 2AFC, the subject receives a stimulus and after that, two alternatives are presented. Only one is the correct choice. Normally, a reward or a punishment are used after the decision, depending on the choice (this strategy is also called Reinforcement Learning). Therefore, the environment of the experiment has three ports: left, central and right. The right and left one are used as alternatives while the center one is used to get the task starts. Each of them has a infra-red beams to detect when the rats pokes in/out, a LED that can be turn on/off and a metal tube for the water delivery as reward. Furthermore, there are two speakers, through which the sound stimuli are delivered, and a big light that turns-on as a punishment for a wrong choice. All the components are controlled as Finite State-Machines by the Arduino board. It means that the states and the transitions are defined by external input, e.g. by the computer. The latter is connected to the Arduino board that controls the devices, to a camera that records the experiments, and to a sound card to trig the stimulus. All these components need to work jointly. This Master Thesis will include the development of a video tracking system, a feature of capital importance for certain studies, that has been missing in the previous system’s that have been used at the laboratory. The algorithm is specifically designated and developed for these kind of experiments with rats. It is useful to tracks the head during the tasks for many application such as to detect when a “Change of Mind” occurs. Many approaches of foreground subtraction are exposed and commented. Then a novel adaptiveselective background updating method is proposed to avoid some issue where other methods fail. Afterwords, the method is used to track the position of the rat. Finally, the algorithm is compared with the others methods in terms of general problem of foreground detection. Then it is tested comparing the tracking with the experiments results of a real task to obtain a measure of accuracy and precision of this method. All the details of the behaviour boxes where rats perform the tasks, the system that controls the experiment and the video analysis are explained step by step in this Master Thesis.
Descripció
En col·laboració amb la Universitat de Barcelona (UB) i la Universitat Rovira i Virgili (URV)
MatèriesArduino (Programmable controller), Neurosciences, Video recording, Arduino (Controlador programable), Neurociències, Vídeo
TitulacióMÀSTER UNIVERSITARI EN INTEL·LIGÈNCIA ARTIFICIAL (Pla 2017)
Localització
1: Romana Aponense fr 162, 35142 Padova PD, Itàlia
URIhttp://hdl.handle.net/2117/115348
Col·leccions
Comparteix: