Diversity and hierarchy in supramolecular assemblies of triphenylalanine: from laminated helical ribbons to toroids 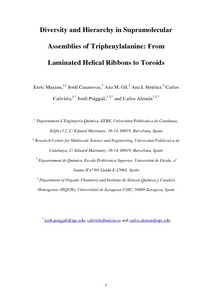 Document typeArticle
Rights accessOpen Access
All rights reserved. This work is protected by the corresponding intellectual and industrial property rights. Without prejudice to any existing legal exemptions, reproduction, distribution, public communication or transformation of this work are prohibited without permission of the copyright holder
Abstract
Microstructures from small phenylalanine-based peptides have attracted great attention lately because these compounds are considered to be a new class of tunable materials. In spite of the extensive studies on uncapped diphenylalanine and tetraphenylalanine peptides, studies on the self-assembly of uncapped triphenylananine (FFF) are very scarce and nonsystematic. In this work, we demonstrate that FFF assemblies can organize in a wide number of well-defined supramolecular structures, which include laminated helical-ribbons, leaflike dendrimers, doughnut-, needle-, and flower-shapes. These organizations are produced by the attractive or repulsive interactions between already formed assemblies and therefore can be controlled through the choice of solvents used as the incubation medium. Thus, the formation of the desired supramolecular structures is regulated through the protonation/deprotonation of the terminal groups, the polarity of the incubation medium, which affects both peptide···solvent interactions and the cavity solvation energy (i.e., solvent···solvent interactions), and the steric interactions between own assemblies that act as building blocks. Finally, the ß-sheet disposition in the latter structural motifs has been examined using both theoretical calculations and Fourier transform infrared spectroscopy. Results indicate that FFF molecules can adopt both parallel and antiparallel ß-sheets. However, the former one is the most energetically favored because of the formation of p–p stacking interactions between the aromatic rings of hydrogen-bonded strands.
CitationMayans, E., Casanovas Salas, Jordi, Gil, A., Jimenez, A., Cativiela, C., Puiggali, J., Aleman, C. Diversity and hierarchy in supramolecular assemblies of triphenylalanine: from laminated helical ribbons to toroids. "Langmuir", 4 Abril 2017, vol. 33, núm. 16, p. 4036-4048.
URIhttp://hdl.handle.net/2117/115241
DOI10.1021/acs.langmuir.7b00622
ISSN0743-7463
Publisher versionhttp://pubs.acs.org/doi/abs/10.1021/acs.langmuir.7b00622
Collections
Share: