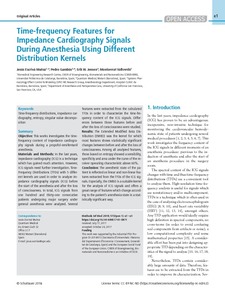 Except where otherwise noted, content on this work is licensed under a Creative Commons license : Attribution-NonCommercial-NoDerivs 3.0 Spain
Abstract
Objective: This works investigates the time-frequency content of impedance cardiography signals during a propofol-remifentanil anesthesia. Materials and Methods: In the last years, impedance cardiography (ICG) is a technique which has gained much attention. However, ICG signals need further investigation. Time-Frequency Distributions (TFDs) with 5 different kernels are used in order to analyze impedance cardiography signals (ICG) before the start of the anesthesia and after the loss of consciousness. In total, ICG signals from one hundred and thirty-one consecutive patients undergoing major surgery under general anesthesia were analyzed. Several features were extracted from the calculated TFDs in order to characterize the time-frequency content of the ICG signals. Differences between those features before and after the loss of consciousness were studied. Results: The Extended Modified Beta Distribution (EMBD) was the kernel for which most features shows statistically significant changes between before and after the loss of consciousness. Among all analyzed features, those based on entropy showed a sensibility, specificity and area under the curve of the receiver operating characteristic above 60%. Conclusion: The anesthetic state of the patient is reflected on linear and non-linear features extracted from the TFDs of the ICG signals. Especially, the EMBD is a suitable kernel for the analysis of ICG signals and offers a great range of features which change according to the patient’s anesthesia state in a statistically significant way.
CitationEscrivá, J., Gambus, P., Jensen, E.W., Vallverdu, M. Time-frequency features for impedance cardiography signals during anesthesia using different distribution kernels. "Methods of information in medicine", February 2018, vol.57, núm.1 p. e1-e9.
URIhttp://hdl.handle.net/2117/115165
DOI10.3414/ME17-01-0071
ISSN0026-1270
Publisher versionhttps://www.thieme-connect.de/products/ejournals/html/10.3414/ME17-01-0071
Collections
Share: