The elusive nature of the r-stars 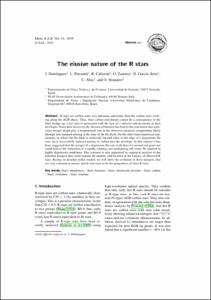 R stars are carbon stars, less luminous and hotter than the carbon stars evolving along the AGB phase. Thus, their carbon enrichment cannot be a consequence of the third dredge-up, a fact also in agreement with the lack of s-element enhancements in their envelopes. Since their discovery the absence of binaries has lead to the conclusion that a previous merger might play a fundamental role in the observed chemical composition, likely through non-standard mixing at the time of the He-flash. On the other hand numerical simulations, in which the He-flash is artificially located close to the edge of a degenerate He core, have successfully induced mixing of carbon into the envelope. In this context it has been suggested that the merger of a degenerate He core with that of a normal red giant star could lead to the formation of a rapidly rotating core undergoing o -centre He ignition in highly degenerate conditions. This scenario is also supported by statistical analysis of the potential mergers that could explain the number, and location in the Galaxy, of observed R stars. Basing on detailed stellar models we will show the evolution of these mergers, that are very common in nature, and do not seem to be the progenitors of (hot) R stars.
CitationDomínguez, I. [et al.]. The elusive nature of the r-stars. "Memorie della Societá Astronomica Italiana", 10 Octubre 2010, vol. 81, p. 1039-1044.
URIhttp://hdl.handle.net/2117/11511
ISSN0037-8720
Publisher versionhttp://sait.oat.ts.astro.it/MmSAI/81/PDF/1039.pdf