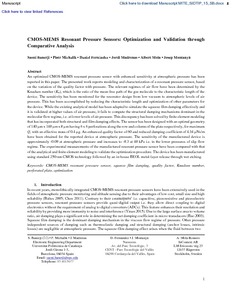 Mola, Albert
Montanyà, Josep
Document typeArticle
Rights accessOpen Access
Abstract
An optimized CMOS-MEMS resonant pressure sensor with enhanced sensitivity at atmospheric pressure has been reported in this paper. The presented work reports modeling and characterization of a resonant pressure sensor, based on the variation of the quality factor with pressure. The relevant regimes of air flow have been determined by the Knudsen number, which is the ratio of the mean free path of the gas molecule to the characteristic length of the device. The sensitivity has been monitored for the resonator design from low vacuum to atmospheric levels of air pressure. This has been accomplished by reducing the characteristic length and optimization of other parameters for the device. While the existing analytical model has been adapted to simulate the squeeze film damping effectively and it is validated at higher values of air pressure, it fails to compute the structural damping mechanisms dominant in the molecular flow regime, i.e. at lower levels of air pressure. This discrepancy has been solved by finite element modeling that has incorporated both structural and film damping effects. The sensor has been designed with an optimal geometry of 140 × 140 × 8 µm having 6 × 6 perforations along the row and column of the plate, respectively, for maximum Q, with an effective mass of 0.4 µg. An enhanced quality factor of 60 and reduced damping coefficient of 4.34 µNs/m have been obtained for the reported device at atmospheric pressure. The sensitivity of the manufactured device is approximately -0.09 at atmospheric pressure and increases to -0.3 at 40 kPa i.e. in the lower pressures of slip flow regime. The experimental measurements of the manufactured resonant pressure sensor have been compared with that of the analytical and finite element modeling to validate the optimization procedure. The device has been manufactured using standard 250 nm CMOS technology followed by an in-house BEOL metal-layer release through wet etching.
Description
The final publication is available at Springer via http://dx.doi.org/10.1007/s00542-016-2878-3
CitationBanerji, S., Michalik, P., Méndez Fernández, Daniel, Madrenas, J., Mola, A., Montanyà, J. CMOS-MEMS resonant pressure sensors: optimization and validation through comparative analysis. "Microsystem technologies", 1 Setembre 2017, vol. 23, núm. 9, p. 3909-3925.
URIhttp://hdl.handle.net/2117/115081
DOI10.1007/s00542-016-2878-3
ISSN0946-7076
Publisher versionhttps://link.springer.com/article/10.1007%2Fs00542-016-2878-3
Collections
Share: