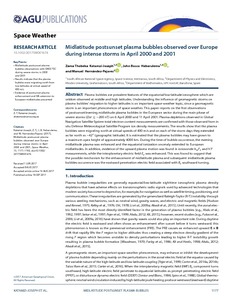 Plasma bubbles are prevalent features of the equatorial/low-latitude ionosphere which are seldom observed at middle and high latitudes. Understanding the influence of geomagnetic storms on plasma bubbles' migration to higher latitudes is an important space weather topic, since a geomagnetic storm is an important phenomenon of space weather. This paper reports on the first observations of postsunset/evening midlatitude plasma bubbles in the European sector during the main phase of severe storms (Dst=-200 nT) on 6 April 2000 and 11 April 2001. Plasma depletions observed in Global Navigation Satellite System total electron content measurements are confirmed with those observed from in situ Defense Meteorological Satellite Program ion density measurements. The results show that the plasma bubbles were migrating north at virtual speeds of 400 m/s and on each of the storm days they extended as far north as ~42° (geographic latitude). It is estimated that the plasma bubbles may have grown to a maximum apex height of approximately 4000 km. During the time of bubble occurrence, the evening midlatitude plasma was enhanced and the equatorial ionization anomaly extended to European midlatitudes. In addition, evidence of the upward plasma motion was found in ionosonde hmF2 and h'F measurements, while the interplanetary electric field Ey was enhanced. This was found to suggest that the possible mechanism for the enhancement of midlatitude plasma and subsequent midlatitude plasma bubbles occurrence was the eastward penetration electric field associated with Bz southward turning.
CitationKatamzi, Z., Habarulema, J., Hernandez, M. Midlatitude postsunset plasma bubbles observed over Europe during intense storms in April 2000 and 2001. "Space weather: the international journal of research and applications", Setembre 2017, vol. 15, núm. 9, p. 1177-1190.
URIhttp://hdl.handle.net/2117/115052
DOI10.1002/2017SW001674
ISSN1542-7390
Publisher versionhttp://onlinelibrary.wiley.com/doi/10.1002/2017SW001674/pdf