Relaxation dynamics vs crystallization kinetics in the amorphous state: the case of Stiripentol 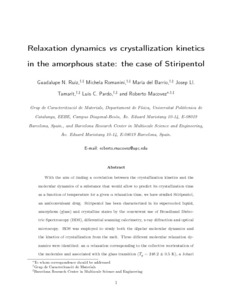 With the aim of finding a correlation between the crystallization kinetics and the molecular dynamics of a substance that would allow prediction of its crystallization time as a function of temperature for a given a relaxation time, we have studied stiripentol, an anticonvulsant drug. Stiripentol has been characterized in its supercooled liquid, amorphous (glass), and crystalline states by the concurrent use of broadband dielectric spectroscopy (BDS), differential scanning calorimetry, X-ray diffraction, and optical microscopy. BDS was employed to study both the dipolar molecular dynamics and the kinetics of crystallization from the melt. Three different molecular relaxation dynamics were identified: an a relaxation corresponding to the collective reorientation of the molecules and associated with the glass transition (Tg = 246.2 ± 0.5 K), a Johari Goldstein ß relaxation that can be associated with the single-molecule precursor of the a process, and a ¿ relaxation arising from intramolecular motions. Isothermal crystallization of Stiripentol was studied by means of BDS well above the glass transition (between 273 and 293 K), and it was observed under optical microscope at ambient conditions. Stiripentol did not exhibit any sign of polymorphism at ambient pressure, and it recrystallized from the melt into its stable crystalline form. The crystallization kinetics did not obey the Avrami law. Stiripentol displayed a very low nucleation rate, and drops of liquid stiripentol were observed to crystallize completely from a single nucleus before the appearance of new nuclei, so that the crystallite grew according to the morphology of the liquid domains, a fact that might explain the lack of validity of the Avrami law. Possible correlations between the crystallization kinetics and the molecular dynamics have been analyzed, finding that the crystallization time has a sublinear dependence on the cooperative relaxation time, as is the case in other substances reported in the scientific literature. This could suggest a general correlation of these parameters, at least at temperatures above Tg. The low nucleation rate is an interesting feature in the quest of possible mechanisms that allow enhancing the physical stability of amorphous drugs
CitationRuiz, G., Romanini, M., Del Barrio, M., Tamarit, J. Ll., Pardo, L., Macovez, R. Relaxation dynamics vs crystallization kinetics in the amorphous state: the case of Stiripentol. "Molecular pharmaceutics", 6 Novembre 2017, vol. 14, núm. 11, p. 3636-3643.
URIhttp://hdl.handle.net/2117/114986
DOI10.1021/acs.molpharmaceut.7b00399
ISSN1543-8384
Publisher versionhttp://pubs.acs.org/doi/abs/10.1021/acs.molpharmaceut.7b00399