Generation of segmental chips in metal cutting modelled with the PFEM 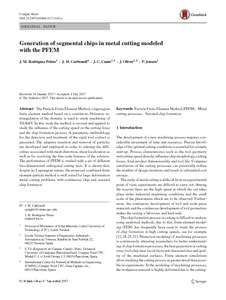 Jonsen, Par
Document typeArticle
Rights accessOpen Access
All rights reserved. This work is protected by the corresponding intellectual and industrial property rights. Without prejudice to any existing legal exemptions, reproduction, distribution, public communication or transformation of this work are prohibited without permission of the copyright holder
Abstract
The Particle Finite Element Method, a lagrangian finite element method based on a continuous Delaunay re-triangulation of the domain, is used to study machining of Ti6Al4V. In this work the method is revised and applied to study the influence of the cutting speed on the cutting force and the chip formation process. A parametric methodology for the detection and treatment of the rigid tool contact is presented. The adaptive insertion and removal of particles are developed and employed in order to sidestep the difficulties associated with mesh distortion, shear localization as well as for resolving the fine-scale features of the solution. The performance of PFEM is studied with a set of different two-dimensional orthogonal cutting tests. It is shown that, despite its Lagrangian nature, the proposed combined finite element-particle method is well suited for large deformation metal cutting problems with continuous chip and serrated chip formation.
CitationRodriguez, J.M., Carbonell, J.M., Cante, J.C., Oliver, J., Jonsen, P. Generation of segmental chips in metal cutting modelled with the PFEM. "Computational mechanics (Online)", 1 Setembre 2017, p. 1-17.
URIhttp://hdl.handle.net/2117/114966
DOI10.1007/s00466-017-1442-z
ISSN1432-0924
Publisher versionhttps://link.springer.com/article/10.1007/s00466-017-1442-z
Collections
Share: