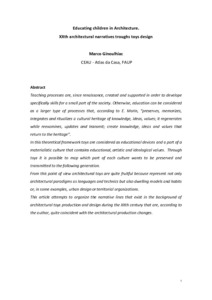 Teaching processes are, since renaissance, created and supported in order to develope specifically skills for a small part of the society. Otherwise, education can be considered as a larger type of processes that, according to E. Morin, “preserves, memorizes, integrates and ritualizes a cultural heritage of knowledge, ideas, values; it regenerates while reexamines, updates and transmit; create knowledge, ideas and values that return to the heritage”. In this theoretical framework toys are considered as educational devices and a part of a materialistic culture that contains educational, artistic and ideological values. Through toys it is possible to map which part of each culture wants to be preserved and transmitted to the following generation. From this point of view architectural toys are quite fruitful because represent not only architectural paradigms as languages and technics but also dwelling models and habits or, in some examples, urban design or territorial organizations. This article attempts to organize the narrative lines that exist in the background of architectural toys production and design during the XXth century that are, according to the author, quite coincident with the architectural production changes.