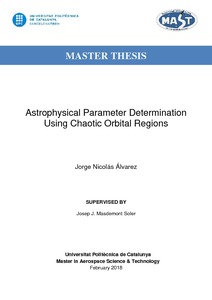 CovenanteeEuropean Space Research and Technology Centre
Document typeMaster thesis
Rights accessOpen Access
Abstract
The goal of this thesis is to show that chaotic orbits of a dynamical system are advantageous (compared with regularnes) to determine the characteristic parameters of the system, and to give an estimate about the behaviour of the error as a function of the number of observations. The utility of chaotic trajectories for parameter determination in a complex dynamical system such as the restricted full three-body problem is assessed. The model takes into consideration the motion of a particle of negligible mass around a binary system where the main body is modeled as a tri-axial ellipsoid, taking into account its mass distribution, and the smaller one as point mass sphere. It is studied by means of a program coded in Python, capable of simulating the binary system gravity field and propagating trajectories in three dimensions around it. It returns verification values such as the Jacobi constant, the state transition matrix and crashing event assessment allowing lots of flexibility in the parameter settings. A combination of Poincaré maps, which allow to study the periodicity of a trajectory in a visual way; and mathematical tools such as the finite time Lyapunov exponents and the Pesin entropy formula, which indicate how sensitive a trajectory is to initial conditions (main condition for chaotic behaviour) is used. They return similar and reliable values providing redundancy and robustness to the procedure. For the determination of parameters we have developed a procedure, based on least squares approximations, that determines how much the uncertainty in the parameter determination of the system decreases as more measurements are taken. There is a strong correlation between the error in the parameter determination and the length of the trajectory, obviously, the error is reduced as more measurements are taken. If N denotes the number of measurements, for a regular orbit the uncertainty in the determination behaves as N^-(1/2). For chaotic orbits we have found scalings of up to N^-3, which are better than the scalings found in previous works for simple systems, which were between N^-1 and N^-2.
SubjectsAstronautics, Astrophysics, Astronàutica, Astrofísica
URIhttp://hdl.handle.net/2117/114933
Collections
Share: