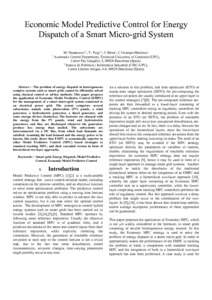 Document typeConference report
Rights accessOpen Access
Abstract
The problem of energy dispatch in heterogeneous complex systems such as smart grids cannot be efficiently solved using classical control or ad-hoc methods. This paper proposes the application of Economic Model Predictive Control (EMPC) for the management of a smart micro-grid system connected to an electrical power grid. The system comprises several subsystems, namely some photovoltaic (PV) panels, a wind generator, a hydroelectric generator, a diesel generator, and some storage devices (batteries). The batteries are charged with the energy from the PV panels, wind and hydroelectric generators, and they are discharged whenever the generators produce less energy than needed. The subsystems are interconnected via a DC Bus, from which load demands are satisfied. Assuming the load demand and the energy prices to be known, this study shows that EMPC is economically superior to other Model Predictive Control (MPC) based strategies (a standard tracking MPC, and their cascaded version in form of hierarchical two-layer approach).
Description
© 20xx IEEE. Personal use of this material is permitted. Permission from IEEE must be obtained for all other uses, in any current or future media, including reprinting /republishing this material for advertising or promotional purposes, creating new collective works, for resale or redistribution to servers or lists, or reuse of any copyrighted component of this work in other works
CitationNassourou, M., Puig, V., Blesa, J., Ocampo-Martinez, C.A. Economic model predictive control for energy dispatch of a smart microgrid system. A: International Conference on Control, Decision and Information Technologies. "4th-2017 International Conference on Control, Decision and Information Technologies". 05/04/2017, p. 944-949.
URIhttp://hdl.handle.net/2117/114894
DOI10.1109/CoDIT.2017.8102719
Publisher versionhttp://ieeexplore.ieee.org/document/8102719/
Collections
Share: