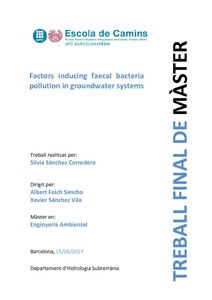 Document typeMaster thesis
Rights accessOpen Access
Abstract
Hand-pumped tube-wells offer affordable access to shallow groundwater and provide the main groundwater extraction technology for villages in many developing countries across Africa, Asia and the Pacific (Ferguson et al., 2011). However, sanitary conditions of these water sources are mainly low. The objective of this report is to use Principal Component Analysis (PCA) to discern the importance between several hydrogeological, hydrochemical, physical and sanitary variables in faecal bacterial pollution in a coastal area of Kenya. Two campaigns were held, March and June 2016, in which field parameters were measured in situ in every sample point as well as E. coli quantification based upon the most probable number (MPN) principle of quantification. The laboratory test results were analysed using SPSS – IMB software and excel sheets, presented in tables. The result of E. coli quantification ranges from 0 MPN/100ml to >100 MPN/100ml. Thirty-six of the eighty-seven waterpoints analysed showed no E. coli contamination in both campaigns. The rest of the waterpoints present intermediate, high or very-high risk contamination, hardly varying from one campaign to another. Two different subsets of PCAs were conducted, considering, firstly (1) all type of groundwater points (wells/boreholes) and, secondly (2) open wells and open wells with handpumps. Regarding all type of wells, E. coli, type of well, aquifer and question 8: “Are there any additional latrines within 30m. of the well?” were highly correlated. Out of these four variables, the most important one was the one between E. coli and type of well (well vs borehole), with a correlation of -0.840 vs 0.897, respectively. These results support that direct microbial contamination routes predominate, mainly supported by type of well, as in most low-income urban communities (Graham et al., 2013). Aquifer and distance from latrines are also important factors inducing faecal contamination, but less correlated than type of well. In the case of open wells and open wells with handpumps, our results varied, now being highly significant those variables related to hydrogeological conditions: water column, depth to groundwater level and eH rather than sanitary factors.
SubjectsGroundwater -- Pollution, Aigües subterrànies -- Contaminació
DegreeMÀSTER UNIVERSITARI EN ENGINYERIA AMBIENTAL (Pla 2014)
URIhttp://hdl.handle.net/2117/114887
Collections
Share: