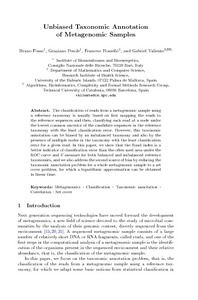 Document typeConference report
PublisherSpringer
Rights accessOpen Access
All rights reserved. This work is protected by the corresponding intellectual and industrial property rights. Without prejudice to any existing legal exemptions, reproduction, distribution, public communication or transformation of this work are prohibited without permission of the copyright holder
ProjectINMARE - Industrial Applications of Marine Enzymes: Innovative screening and expression platforms to discover and use the functional protein diversity from the sea (EC-H2020-634486)
ELIXIR-EXCELERATE - ELIXIR-EXCELERATE: Fast-track ELIXIR implementation and drive early user exploitation across the life-sciences. (EC-H2020-676559)
EMBRIC - European Marine Biological Research Infrastructure Cluster to promote the Blue Bioeconomy (EC-H2020-654008)
Abstract
The classification of reads from a metagenomic sample using a reference taxonomy is usually based on first mapping the reads to the reference sequences and then, classifying each read at a node under the lowest common ancestor of the candidate sequences in the reference taxonomy with the least classification error. However, this taxonomic annotation can be biased by an imbalanced taxonomy and also by the presence of multiple nodes in the taxonomy with the least classification error for a given read. In this paper, we show that the Rand index is a better indicator of classification error than the often used area under the ROC curve and F-measure for both balanced and imbalanced reference taxonomies, and we also address the second source of bias by reducing the taxonomic annotation problem for a whole metagenomic sample to a set cover problem, for which a logarithmic approximation can be obtained in linear time.
CitationFosso, B., Pesole, G., Rosselló, F., Valiente, G. Unbiased taxonomic annotation of metagenomic samples. A: International Symposium on Bioinformatics Research and Applications. "Bioinformatics Research and Applications: 13th International Symposium, ISBRA 2017, Honolulu, HI, USA, May 29-June 2, 2017: proceedings". Berlín: Springer, 05/2017, p. 162-173.
URIhttp://hdl.handle.net/2117/114882
DOI10.1007/978-3-319-59575-7_15
ISBN978-3-319-59575-7
Publisher versionhttps://link.springer.com/chapter/10.1007/978-3-319-59575-7_15
Collections
Share: