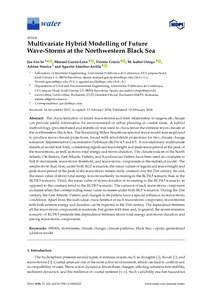 Document typeArticle
Rights accessOpen Access
European Commission's projectCEASELESS - Copernicus Evolution and Aplications with Sentinel Enhancements and Land Effluents for Shores and Seas (EC-H2020-730030)
Abstract
The characterization of future wave-storms and their relationship to large-scale climate can provide useful information for environmental or urban planning at coastal areas. A hybrid methodology (process-based and statistical) was used to characterize the extreme wave-climate at the northwestern Black Sea. The Simulating WAve Nearshore spectral wave-model was employed to produce wave-climate projections, forced with wind-fields projections for two climate change scenarios: Representative Concentration Pathways (RCPs) 4.5 and 8.5. A non-stationary multivariate statistical model was built, considering significant wave-height and peak-wave-period at the peak of the wave-storm, as well as storm total energy and storm-duration. The climate indices of the North Atlantic Oscillation, East Atlantic Pattern, and Scandinavian Pattern have been used as covariates to link to storminess, wave-storm threshold, and wave-storm components in the statistical model. The results show that, first, under both RCP scenarios, the mean values of significant wave-height and peak-wave-period at the peak of the wave-storm remain fairly constant over the 21st century. Second, the mean value of storm total energy is more markedly increasing in the RCP4.5 scenario than in the RCP8.5 scenario. Third, the mean value of storm-duration is increasing in the RCP4.5 scenario, as opposed to the constant trend in the RCP8.5 scenario. The variance of each wave-storm component increases when the corresponding mean value increases under both RCP scenarios. During the 21st century, the East Atlantic Pattern and changes in its pattern have a special influence on wave-storm conditions. Apart from the individual characteristics of each wave-storm component, wave-storms with both extreme energy and duration can be expected in the 21st century. The dependence between all the wave-storm components is moderate, but grows with time and, in general, the severe emission scenario of RCP8.5 presents less dependence between storm total energy and storm-duration and among wave-storm components.
CitationLin-Ye, J., Garcia, M., Gracia, V., Ortego, M.I., Stanica, A., Sanchez-arcilla, A. Multivariate hybrid modelling of future wave-storms at the northwestern Black Sea. "Water", Febrer 2018, vol. 10, núm. 2, p. 1-28.
URIhttp://hdl.handle.net/2117/114868
DOI10.3390/w10020221
ISSN2073-4441
Publisher versionhttp://www.mdpi.com/2073-4441/10/2/221
Other identifiershttps://www.researchgate.net/publication/323258509_Multivariate_Hybrid_Modelling_of_Future_Wave-Storms_at_the_Northwestern_Black_Sea
Collections
Share: