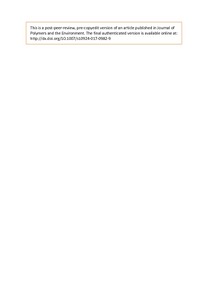 Document typeArticle
Rights accessOpen Access
Abstract
The aim of this study is to analyse the environmental impacts (EIs) of the process of preparation of new biocomposite materials obtained from polylactide (PLA) and chicken feathers (CFs). Two CFs stabilization methods and different percentages of CFs have been studied. The EIs of these new composites were compared to the impact of virgin PLA. Cradle-to-gate life cycle inventories were assessed for 0–35% v/v of CFs in a CFs/PLA biocomposite. Two CFs stabilization processes, autoclave and surfactant, were tested and compared with the aim to prioritize one of them from the environmental point of view. A composite plate of 184¿×¿184¿×¿2.2 mm3 was defined as the functional unit. Autoclave stabilization process exhibited lower environmental impact compared with surfactant stabilization process mainly due to both the lower requirements of electricity and water and the reduced pollution loads of the generated wastewater. Thus, the autoclave process was selected as the standard method when comparing the EIs of the proposed CFs/PLA biocomposites. In this sense, the addition of CFs to PLA matrix proportionally reduces all the EIs compared to pure PLA due to the replacement of PLA with CFs. This behaviour can be explained because the PLA production accounts for the 99% of the impact of the biocomposite. Consequently, CFs conveniently stabilized might be an alternative raw material to prepare CFs/PLA biocomposites with less environmental impact compared to pure PLA
CitationMolins, G., M.D. Alvarez, Garrido, N., Macanás, J., Carrillo, F. Environmental impact assessment of Polylactide(PLA)/chicken feathers biocomposite materials. "Journal of polymers and the environment", 30 Març 2017, vol. 26, núm. 3, p. 873-884.
URIhttp://hdl.handle.net/2117/114855
DOI10.1007/s10924-017-0982-9
ISSN1566-2543
Publisher versionhttps://link.springer.com/article/10.1007/s10924-017-0982-9
Collections
Share: