"Fragments of Sants" language of the urban project 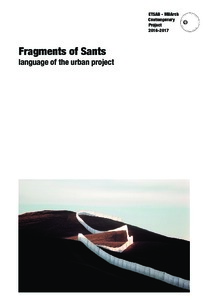 Document typeMaster thesis
Rights accessOpen Access
Abstract
This study aims to individuate the characteristic of those projects that take place in the urban environment, to lay the foundations of a new subject free from urban planning conception and beyond architectural ones. The urban project is a technique developed in many cities of the Europe area from ancient times, and it is today the most powerful tool to model cities of the tomorrow, further, in this research, the link between past and future will be stronger and more apparent. The area of Sants Estacio is an encounter that allowed this study to begin and to find its conclusion. The big void this train station carved around itself constitutes a massive snatch in the urban tissue of the city of Barcelona, a metropolitan center famous for its robust generative urban grid, and its through this snatch that can be seen the internal movements and processes that built the area and therefore the entire city. Zooming in, in the open wound in the quarter of Sants appears evident the presence of different human traces that tried to define and build a space that was functionless and deprived of its identity. This signs of human designs constitute what is called “urban project,” they consist in plazas, parks, canopies, facades, lighthouses, stairs, slopes and much more graphic signs that all together form a various and chaotic environment for urban life. The recognition of this elements and the entire absence of a thread capable of connecting them in a continuous path of composition and design raised the question of what are actually urban projects and how are they generated in the minds of their designers. The fragments of urban tissue and urban projects present in Sants, let emerge the presence of a new language that follows the concepts and the contents of the urban planning practice but that are built with the tool and techniques of architecture, being in the meanwhile linked with them without exclusion. Setting the rules of composition of the unknown language, how the author calls the language of the urban project, is the main challenge of this study and supposes a knowledge of many subjects that span from philosophy and art to urban planning and architecture. All this subject talks of the system city in different points of view that give to the discussion an overall understanding of the urban settlements as a complex system of social relations and physical structures and infrastructures. The cross analysis operated in a heuristic way generates exciting results that will enable the reader to build a starting point for a wider and broader debate that could go beyond the closed system of Barcelona or the Mediterranean city and aim to set the universal rules of construction of the city. Several times in this study the past theoretical author of cities and architecture will be taken as references, and on them, by contrary or by analogy, it will construct a complex and deep concept of how humanity can be citizen and city itself at the same time. The actual and physical structure of the city will meet the civic ideology and together will retrace the path that makes Acropolis of Athens similar to the Raised Gardens of Sants and that makes death be life for a quarter like Sants. At the end, the author will propose an urban project capable to solve the area’s fragility and issues following the rules of composition set previously, not with the presumption of acting as a savior of the city of bad design but as an exercise capable to follow suggestions and inspirations taken from pioneers of the urban projects. The work was developed in ETSAB, and in the environment of the Design Department, this surely allowed it to be organized in a context of theory and practice of architecture, that is different from the author background, and that gave to him previously alien concepts as architectural school of thoughts, matter of materiality, size, scale and composition of an urban project and last, certainly most important, that every architectural theory even the most utopian must be able to be built or constructed. There’s no value behind the architectural theory that cannot be built.
Description
Màster universitari en Estudis Avançats en Arquitectura: Contemporary Project
SubjectsCity planning -- Spain -- Barcelona, Railroad terminals -- Spain -- Barcelona, Urbanisme -- Catalunya -- Barcelona, Estació de Sants (Barcelona, Catalunya), Estacions de ferrocarrils -- Catalunya -- Barcelona
DegreeMÀSTER UNIVERSITARI EN ESTUDIS AVANÇATS EN ARQUITECTURA-BARCELONA (Pla 2015)
Location
1: Sants Estació, 08014 Barcelona, Espanya
URIhttp://hdl.handle.net/2117/114783
Collections
Share: