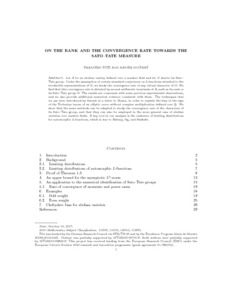 Let A be an abelian variety defined over a number field and let G denote its Sato–Tate group. Under the assumption of certain standard conjectures on L -functions attached to the irreducible representations of G, we study the convergence rate of any virtual character of G. We find that this convergence rate is dictated by several arithmetic invariants of A, such as its rank or its Sato–Tate group G. The results are consonant with some previous experimental observations, and we also provide additional numerical evidence consistent with them. The techniques that we use were introduced by Sarnak in a letter to Mazur, in order to explain the bias in the sign of the Frobenius traces of an elliptic curve without complex multiplication defined over Q. We show that the same methods can be adapted to study the convergence rate of the characters of its Sato–Tate group, and that they can also be employed in the more general case of abelian varieties over number fields. A key tool in our analysis is the existence of limiting distributions for automorphic L-functions, which is due to Akbary, Ng, and Shahabi.
CitationFite, F., Guitart, X. On the rank and the convergence rate toward the Sato-Tate measure. "International mathematics research notices", 13 July 2019, p. 4081–4118
URIhttp://hdl.handle.net/2117/114584
DOI10.1093/imrn/rnx234
ISSN1687-0247
Publisher versionhttps://academic.oup.com/imrn/advance-article-abstract/doi/10.1093/imrn/rnx234/4554444