Options for closing the loop for plastic debris. Environmental analysis of beach clean-up and waste treatments 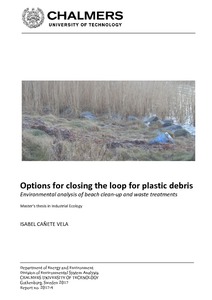 gmail.com
Tutor / directorBaumann, Henrikke
Document typeMaster thesis
Rights accessOpen Access
Abstract
Plastic debris (PD) is one of the biggest pollution problems in the marine environment. Nets, ropes, packaging, and pellets are the most common items that are spread around the world’s oceans causing an impact on wildlife and human health, and economic loss. Although mitigation is tantamount, the question remains for what can be done with the plastics that are already in the oceans. We conducted a literature review of research on debris and plastics waste management. Studies as shown that much of the collected marine debris goes to landfilling because it is little-known, diverse, salty, and too dirty for both incineration and recycling. Also, it showed that there is a strong focus on describing the environmental problems of marine and plastic debris, and that plastic debris is described in natural science terms that the waste management industry cannot use for determining suitable treatments. In order to better translate beach debris data into waste management data, we have collected beach debris from the Swedish West coast and conducted physical and chemical analyses for the characterization of the debris in waste management terms. Based on this data and the literature review, we have identified several recycling options for the PD. To identify environmental pros and cons with the different treatments, we conducted a life cycle assessment (LCA) comparing mechanical, feedstock recycling and energy recovery to establish an appropriate and practical approach towards closing the loop for PD. These treatment options were analysed in the context of two clean-up operations. The analyses suggest that mechanical treatments are not suitable for most plastics (due to they are fragmented, degraded and with a wide range of additives) whereas chemical treatments are suggested as a suitable solution. Feedstock recycling allows the production of raw material, as well as it may have fewer emissions, in comparison with combustion or landfilling which have higher emissions per tonne of PD. Finally, the LCA of two clean-up operations were performed, using the data obtained in the previous processes to see the big picture: observing the ecological benefits of removing this debris, and seeing whether that benefit is juxtaposed according to the recycling option. Although the environmental profits are difficult to quantify, the LCA results suggest that the clean-up process can have a positive impact with both mechanical and feedstock recycling, as long as the operation itself has low emissions (e.g. reducing transport emissions of the volunteers).
SubjectsPlastics -- Recycling, Beaches -- Environmental aspects, Plàstics -- Reciclatge, Platges -- Aspectes ambientals
DegreeMÀSTER UNIVERSITARI EN ENGINYERIA INDUSTRIAL (Pla 2014)
URIhttp://hdl.handle.net/2117/114574
Collections
Share: