Analysis of strain localization with a non-local plasticity model 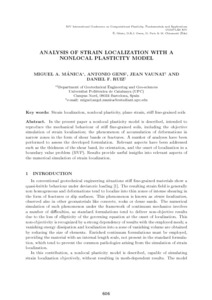 Document typeConference report
Rights accessOpen Access
Abstract
Strain localization can be defined as the accumulation of deformations in narrow zones, in the form of shear bands or cracks, commonly observed in several geomaterials like concrete, rocks, dense sands, or stiff fine-grained soils. The numerical simulation of such phenomenon under the framework of continuum mechanics involves a number of difficulties, as standard formulations tend to deliver nonobjective results due to the loss of ellipticity of the governing equation at the onset of localization. In the present paper, a non-local plasticity model is described, capable of simulating strain localization objectively, without resulting in mesh-dependent results. The model is intended for modelling stiff fine-grained soils, thus the yield surface and its evolution with deformation captures the main behaviour characteristics of these materials. A number of analyses have been performed to assess the developed formulation for the simulation of localized deformation patterns. Relevant aspects have been addressed, such as the thickness of the shear band, its orientation, and the onset of localization in a boundary value problem. In addition, a real plane strain experiment on Beaucaire marl [2] has been simulated, and the results of the analysis are compared not only with global measurements, but with the entire strain field, observed experimentally using the false relief stereophotogrammetry technique [1]. The behaviour of the test has been satisfactorily reproduced in terms of both, global measurements and strain fields.
CitationMánica, M.A., Gens, A., Vaunat, J., Ruiz, D.F. Analysis of strain localization with a non-local plasticity model. A: International Conference on Computational Plasticity. "Computational Plasticity XIV: Fundamentals and Applications: proceedings of the XIVInternational Conference on Computational Plasticity: Fundamentals and Applications, held in Barcelona, Spain 5-7September 2017". Barcelona: 2017, p. 606-612.
URIhttp://hdl.handle.net/2117/114568
ISBN978-84-946909-6-9
Publisher versionhttp://congress.cimne.com/complas2017/frontal/Doc/EbookCOMPLAS2017.pdf
Collections
Share: