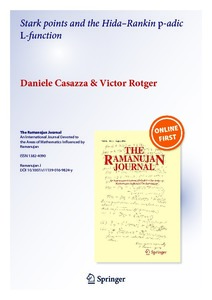 Document typeArticle
Rights accessOpen Access
European Commission's projectBSD - Euler systems and the conjectures of Birch and Swinnerton-Dyer, Bloch and Kato (EC-H2020-682152)
Abstract
This article is devoted to the elliptic Stark conjecture formulated by Darmon (Forum Math Pi 3:e8, 2015), which proposes a formula for the transcendental part of a p-adic avatar of the leading term at s=1 of the Hasse–Weil–Artin L-series L(E,¿1¿¿2,s) of an elliptic curve E/Q twisted by the tensor product ¿1¿¿2 of two odd 2-dimensional Artin representations, when the order of vanishing is two. The main ingredient of this formula is a 2×2 p-adic regulator involving the p-adic formal group logarithm of suitable Stark points on E. This conjecture was proved by Darmon (Forum Math Pi 3:e8, 2015) in the setting where ¿1 and ¿2 are induced from characters of the same imaginary quadratic field K. In this note, we prove a refinement of this result that was discovered experimentally by Darmon (Forum Math Pi 3:e8, 2015, [Remark 3.4]) in a few examples. Namely, we are able to determine the algebraic constant up to which the main theorem of Darmon (Forum Math Pi 3:e8, 2015) holds in a particular setting where the Hida–Rankin p-adic L-function associated to a pair of Hida families can be exploited to provide an alternative proof of the same result. This constant encodes local and global invariants of both E and K.
Description
The final publication is available at Springer via http://dx.doi.org/10.1007/s11139-016-9824-y
CitationCasazza, D., Rotger, V. Stark points and the Hida-Rankin p-adic L-function. "Rmanujan journal", Febrer 2018, vol. 45, núm. 2, p. 451-473.
URIhttp://hdl.handle.net/2117/114369
DOI10.1007/s11139-016-9824-y
ISSN1382-4090
Publisher versionhttps://link.springer.com/article/10.1007%2Fs11139-016-9824-y
Collections
Share: