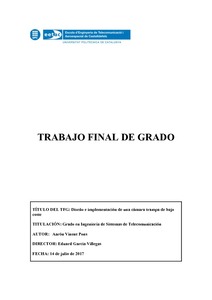 Document typeBachelor thesis
Rights accessOpen Access
Abstract
The objective of this project is the design and development of a low-cost on-ride camera, a type of camera trap (or trail camera), for its installation in some attraction. The function of this type of cameras is to take pictures automtically at a certain point of the attraction, usually at the time of most adrenaline. When the user leaves the attraction, he or she can view or buy the photograph at a kiosk. Its operation is simple; the attraction is equipped with a sensor that is linked and perfectly synchronized to a camera so that a picture is automatically triggered when motion is detected to later send it to the kiosk to be able to download it. In order to make this device, we will take advantage of the features, functionalities and low cost of the single-board computers such as Raspberry Pi, which will be installed the operating system Raspbian. It has a large number of libraries pre-installed for projects of motion detection and sensors. The programming language we will use for applications will be Python, which is an easy-to-learn, very popular and powerful language. We will use a native Python editor such as IDLE. During the project, three different motion detection systems have been implemented and evaluated. The first with a passive infrared sensor (HC-SR501), an ultrasonic sensor (HC-SR04) and finally a third one to be realized by software (image processing). For the capture of the photographs it has been decided to use the camera module that has Raspberry Pi for the capture of images. This module takes high quality images of 8 megapixels. Once tested the different solutions proposed, we will be choosing as transmit the photographs to an external server securely. As would be done in on-ride camera, when it transmits the images to the kiosk.
SubjectsRaspberry Pi (Computer), Raspberry Pi (Ordinador), Càmeres
URIhttp://hdl.handle.net/2117/114319
Collections
Share: